Talk-3 I am not overstating my case 【】

It’s all about my writings. And here’s one that I released in 2015. 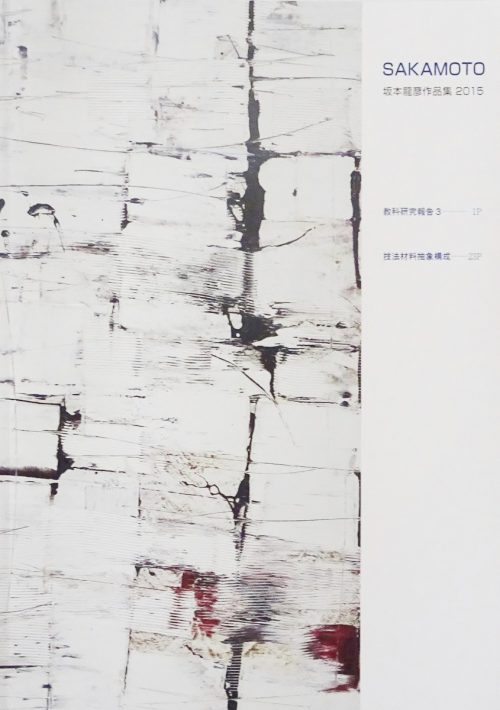 
I introduced DESSINER考 (or Tableau Resurrection Theory if I could say so) through related writings along with my art works. This compilation is also “the essence of my forty years” as well as “a series of my recent works” and was done “in the most splendid way possible” as the latest part of “a forty-year consecration”. Quotation: from Talk-1

Now, I’d like to talk a little more about DESSINER考 ( Tableau Resurrection Theory ). Actually, I had already reached the basic idea of it in 1978. I was so excited that I held the very first exhibition as early as the next year at Ehime Art Museum to release it, but in vain. It was too early and the idea was not yet matured enough.

I held the second exhibition at GALERIE SIMON in October 1990. It was for the first time in Tokyo and was a long-awaited exhibition for me, with a lot more experience and much better works after the first exhibition. And there, having taken eleven years for preparation, what I finally declared in a grave tone with absolute confidence was DESSINER考, saying “Dessiner【desine】仏の語、（線で）描く、デッサン（スケッチ）する・・・西の文化がこの描画行為に負わせてきた再現的観念性の原罪も原罪即仏果と見つけたればその神業が絵画表現の芸術的蘇生を極東より閻浮提に問い返す” and
“Tableau is now coming back to life again with our miracle of aurore-spirituelle”. ・・・Quite obscure and doubtful in many ways though,
it spiritually sounded so true and right to me that even now it well echoes in my mind. “This is me, myself”.

DESSINER考 resists any translation. I don’t want to have its original tone changed even a bit. It is not so much alive in the meaning as in the tone, and the meaning itself alone actually doesn’t mean anything but nonsense. I’m now thinking of “Genuine Truth” (if I could say so) which is not really “truth” but spiritually undeniable, deeply hidden behind reality, and seemingly doesn’t make sense at all. It is meaningful nonsense as I have written so much in the booklet. And DESSINER考 is the one. ・・・Anyway, there is no other way for me than talking and writing in English by myself all over again.

First of all. I’d like to reword “DESSINER考 or Tableau Resurrection Theory”. I’d rather say Prophecy in one word, straight in English. I am afraid I might be overstating but please allow me to say Prophecy for now. I have something to confess.

It was in May 1991, not long after the declaration of Prophecy when I started to study English. Thus the “holy apprenticeship” proceeded, also being led by God, Mary and other spirits even by myself from a previous life. ・・・I wouldn’t care at all what other skeptics might criticize. I just want to say what I saw, heard, and thought along with my art works. That’ it. So, I’m not overstating my case after all. There’s nothing to be afraid of.

In exact reality, I say, the truth is that I was enlightened with the idea of DESSINER考 in 1978, and Mary approved it saying 「・・・あなたはかつても求めてきた より高く実現してくださいよ・・・」 in the oracle in 1983 ( Mary knew everything and encouraged me to go on this way). Then Nigihayahi-no-Mikoto (said to be the god of sensitivity) together with Kyonin-sama(the guardian spirit) and Gien(myself from a previous life) left me words in 1984. And then I made the gravest-ever declaration of DESSINER考 in 1990, which even now well echoes
in my mind with such nonsense as Genuine Truth of the confession! ・・・This is none other than Prophecy.

A quarter century has passed since I started to study English. At the beginning of the course, I couldn’t believe that I started dedicating myself not to practicing painting, but to something else－English. I wrote “this lasted ten years.” It was really the ten-year hardship of an identity crisis. But now I know this was “the assignment given by God” as also written in there, in the booklet. Though the compilation was done by writing in Japanese, there was a small part written in English, which might have implied what I would have been doing next. And now I am writing Gallery Talk in English in order to present Prophecy to the world and to make what I have created in my inner world “proven in this real world and dedicated to people.”

Quotation: from Talk-1 and the writings of the booklet