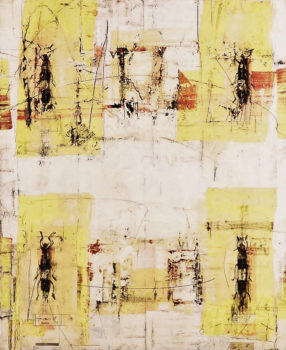 
Actually, the photo above is of a C-print. The sole edition sized 20×31cm. The original oil-painting had been missing for a long time, until that day…


It’s not simply an image of four insects arranged on the four corners of the panel. I was not trying to make a picture of such. I was just practicing coloring, brushing…wiping, scraping and scratching without knowing what I should paint. Such a trial without any purpose usually ends only with despair. Yes, it really does. I know that very well. That’s been my life…So many agonizing trials with little reward as was usual. But at that time, things went unexpectedly right in the end. Kami-kiri was finally imparted on me. Have a close look on it. Kami-kiri itself proves that it was really a bestowal. I’d rather say I didn’t paint Kami-kiri but just helped Kami-Kiri to appear in my painting. You remember the Kurote story (Talk-75). Anyway, I was happy with Kami-kiri, but I didn’t have enough time to enjoy watching it in my studio (then in Tokyo). I had to send this “masterpiece” almost immediately to a group show which would be held by a gallery in Kagawa. It was at the show when I saw Kami-kiri next. My work gained a pretty good reputation among the viewers. And after Kagawa, the next event was coming soon, which was a competition organized by another gallery in Tokyo. My entry was with this “Kami-kiri” and that “Sayori” (Halfbeak-Advent, Talk-8 Fish) another “masterpiece”, you know. So, there seemed to be no worry of losing in this kind of small competition. And I won as everybody expected. I was awarded my own personal exhibition at the gallery for free. After the show, the gallery in Kagawa offered to buy “Kami-kiri” for their collections. The other work “Sayori” also sold to a private collection on another occasion. I was so lucky and happy in those days. But some years later I overheard that the gallery in Kagawa had closed down. All the property including Kami-kiri, which the gallery owned at that time must have been sold at the cheapest price and spread all through Japan. And I lost touch with both the gallery and Kami-kiri. Since then, every time I remembered this painting, I prayed that someone was taking good care of it somewhere in Japan, and so did I pray that morning too, on Wednesday Oct. 26 in 2016.

Local■After the prayer, I felt a slight dull pain in my back. At first, I didn’t care at all and started my daily work. But it grew severe, so severe that I couldn’t bear the pain by noon. I made an emergency call to Minami-Matsuyama Hospital where I usually go first, but unfortunately it was not open. They close on Wednesdays and Thursdays. Right, I remembered. I called Seikyo-Hospital next. But it was on its lunch break and closed until 3 pm. No way, I couldn’t stand waiting any more. It was killing me. The apologetic woman suggested that I should call Nisseki-Hospital which was on duty for emergency that day. The next moment, I was rushing to Nisseki-hospital by bike with no reservation. But strange to say, when I reached the hospital, the terrible pain had almost gone. The doctor must have been baffled and upset hearing this rushed-in patient’s unclear excuse. But I was released peacefully in the end, after being diagnosed as a “possible” kidney stones.

It came to me when I was on my way home. I was so relieved and relaxed that I took a detour for a change. I was pedaling at a slow pace looking around the way. And when I passed a cute hair salon…it was just minutes after I left Nisseki-Hospital towards Himegin-Hall and Dogo, I noticed a painting hung on the wall in the salon, which looked yellow-colored and was somewhat familiar to me. “What ?” I turned back and saw it through the window again. And what I confirmed there was…I still don’t know how to express my astonishment at that sight. It was my painting that I had long wanted to see again. “Kami-kiri” was being treasured here in Matsuyama, at this hair salon.

If you ever visit Matsuyama, and pass by this cute hair salon, don’t forget to confirm that Kami-kiri is hung on the wall inside. It’s Hair make Corto lungo, 3-1, Dogo-Ichiman, Matsuyama. You are allowed to look at Kami-kiri through the window.

I am not telling a happy-coincidence story, as I believe there is no “coincidence” with “Genuine Truth”. Every event has a reason, from the clash of an electron that’s just happened in my phone to the Big Bang. This Kami-kiri story is just the introduction for Talk-15, the talk about Mentor I, a religious psychic. You might think Kami-Kiri story doesn’t have anything to do with kidney stones or Mentor I at all. But I don’t necessarily think so. “The deceased Kaoru ISHIZAKI alias Mentor I” had been working at this Nisseki-hospital. I wonder if every coincidence which happened to me that day might possibly have been caused by spiritual power that relates to ISHIZAKI-san…. To be continued in Talk-15.